13 Most Luxurious Wedding In Nigeria- ( All Time Expensive Wedding ). 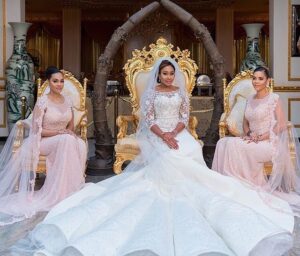 Luxurious Wedding In Nigeria – Talking about weddings in Africa generally, it quite a big deal  particularly in Nigeria. Nigerian  wedding ceremony are a lots worth.

In Nigeria, a wedding is much more than the celebration of joining the lives of two people into one. It is when two entire families join together as one and a Nigerian wedding is an all-out affair that is full of bright colours, toe-tapping music, and ancient traditions.

Because we love wedding from all around the world, here we discovered luxurious wedding  in Nigeria over the years that would amaze you.

Over time there have been some really big weddings that shook the crooks core of this very society.  This Nigerian weddings cost a lot of fortune to put up in the first place.

Either by nature or the influence, it’s fair to say that Nigeria is a wedding-crazed society. Here, everything that is related to the union of man and woman is more significant than you’d expect.

Most Luxurious Wedding In Nigeria:

When Africa’s richest man gives out one of his daughters, you sure can expect it to be nothing short of spectacular. The wedding  was said to shut down Kano, Abuja and the grand finale in Lagos had people raving about it for a while.

Aliko Dangote gave out his daughter Fatima to Jamil, son of a former inspector general of police. The wedding took place over three days and ended with a lavish ceremony at the prestigious Eko and Suites hotel in Lagos.

Prominent figures like the world’s richest man Bill Gates was in attendance.

Nigerian mothers do not joke with weddings, talk more of when  Africa most richest woman have her own son getting married.

The wedding of Folarin, one of the sons of billionaire businesswoman Folorunsho Alakija to Iranian beauty Nazanin Jafarian Ghaissarifa has been described as one of the most lavish weddings ever held in London.

The wedding which was estimated to have cost £5m (N2.4bn). And the likes of Australian supermodel Shanina Shaik, Nigerian musician Mr Eazi. American musician Robin Thicke was also present at the weddings.

The wedding of Halima, daughter of Nigerian ex-president Ibrahim Badamosi Babangida to Auwal Lawal had the who is who of Nigerian society in attendance.

The Minna airport was said to have welcomed over 24 private jets ferrying important guests. Several ministers, senior government officials, top politicians and even ex-presidents where at the event.

This wedding took place between former President Jonathan’s daughter and her then boyfriend Godswill Osim Edward. Although this is not the first wedding involving an incumbent president’s daughter, it is the most expensive.

Oluseun and Damilola during their traditional wedding Damilola, daughter of Nigeria’s vice President Yemi Osinbajo also got married to Oluseun Bakare in a lavish ceremony with a lot of important guests in attendance.

According to Vanguard, a large number of governors, ministers and other senior government officials graced the occasion.

On the 28th of May, 2016, lots of Nigerians converged at far away Dubai in the United Arab Emirates to celebrate the matrimony of on air personality, Tolu Oniru popularly known as tools and aero contractor pilot Captain Tunde Demuren.

This wedding was not just the talk of town for a very long time, it was also one of the few extravagant celebrity weddings to take place off the shores of Nigeria last year.

When the children of two sitting governors get married, it is expected that it is going to lavish. Fatima, daughter of Kano state Governor Abdulahi Ganduje got married to Abolaji Ajimobi, son of Oyo state governor Abiola Ajimobi in the presence of President Buhari, and other dignitaries.

Senate president and former governor of Kwara State, Bukola Saraki gave his daughter out in marriage in a grand style. One spectacular thing about this particular wedding is that,  Senate President Bukola Saraki  had a lot of important personalities in attendance.

Such as the likes of Africa’s richest man Aliko Dangote was amongst the guests as well as other top captains of industries.

The Sarakis went all out in ensuring their first daughter’s wedding was one that had the town talking and it was indeed a wedding to behold.

The president’s daughter  Zahram Buhari got married to her heart-rub Ahmed , son of billionaire businessman Mohammed Indimi in 2016.

The wedding was graced by prominent figures and it was gathered that they  were reports of lavish gifts the Indimi’s presented to the Buhari family for Zahra’s hand. The wedding literally held the Nigerian internet spellbound for days.

First, their traditional wedding had almost all the celebrities in Lagos in attendance and their white wedding that took place in South Africa trended for weeks on social media.

The wedding between former Big Brother Naija housemate and multiple brand ambassador Ebuka Obi-Uchendu and his beautiful wife and daughter of Nigerian billionaire Cynthia Obianobo took place on the 6th of February, 2016.

Some of the wedding guests include two of the groom’s bosom friends Bankole Wellington popularly known as Banky W and Captain Tunde Demuren, husband of popular Beats FM OAP. Also at this wedding were Timi Dakolo and Noble Igwe.

The wedding between Innocent Idibia popularly known as Tuface and Nigerian Nollywood actress Ani Macaulay was probably the most anticipated celebrity wedding of 2013.

This wedding took place in the beautiful city of Dubai, United Arab Emirates on the 23rd of May, 2013. This occurred 11 years after the duo began dating.

This wedding was attended by both politicians, businessmen and top Nigerian entertainers. It is probably the only recorded case where a Nigerian celebrity got married to one of his baby mamas.

The wedding between top Nollywood actress, Stephanie Okereke and her husband Linus Idahosa was the celebrity wedding of 2012.

Beginning with the wedding venue to the wedding dress and social status of wedding guests, everything about this wedding was in a class of its own.

Just like the beautiful Stephanie had always wanted, her wedding was a perfect fairy tale wedding and also the first known Nigerian wedding to take place in Paris, France.

Present at this wedding were Banky W who played the role of the groom’s best man and other popular faces in Nigerian entertainment.